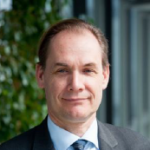 Marc HAMY is an alumnus of Ecole Normale Supérieure (ENS) de la rue d’Ulm and a civil aviation engineer, with a post-graduate diploma from the French national school for civil aviation (ENAC) and a Master degree from the University of Paris Dauphine. He has an important background in aviation, transports, economy, and politics, with many senior executive positions.

He has been successively:

- deputy CFO of DSNA, the French air navigation services provider,
- General Manager of the two air traffic control centres of the south of France,
- Director of the civil aviation authority in the French Pacific territories,
- CEO of DSNA (8000 employees and a turn-over of 1 Billion Euros a year),
- Chief of Staff of the French Minister for Transports,
- deputy Chief of Staff of the Minister for Energy, Transports and Environment,
- COO of Airbus ProSky
- Vice-President, Air Transport and Public Affairs, Airbus SAS.

He is a founding member of the SESAR Joint undertaking, and of the EGNOS SSP, and contributed to create Airbus ProSky in 2010, three companies developing new technologies and services in aviation and space. He is holder of the Legion of Honour, of the National Order of Merit and of the Medal of aeronautics.