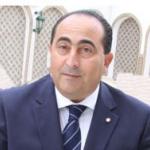 Minister of Transport, Republic of Tunisia

In 1996, Hichem Ben Ahmed obtained the diploma of specialized graduate studies (postgraduate) at the IHEC of Carthage in management (tourism option) and a master's degree in high commercial studies in June 1992.

He also served as Governor of Mahdia, the General Manager of Tunisair handling, the Secretary General of the governorate of Ben Arous and the advisor to Minister of Trade.

He was a member of several boards of Directors of the Tunisian Agency of electronic certification, Mauritanian Airways, Commissariat General for regional development, Etc.